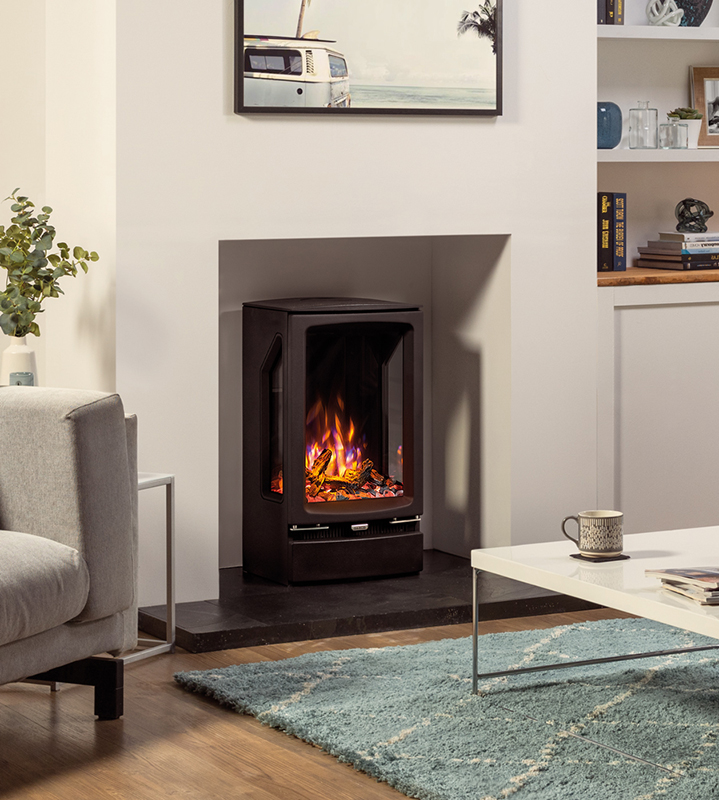 Historically, wood-burning and multifuel stoves have dominated the UK market. However, companies such as Stovax, under their various brand names, have slowly been increasing their electric stove portfolios. Step forward the Vogue Midi T electric stove in its many different guises, perfectly timed to take advantage of consumer trends and concerns regarding climate change.

The first thing to remember about the modern day electric stove is the fact that it is totally different from the three bar electric fires of years gone by. As we will cover below, it is almost impossible to distinguish between an electric stove and its wood-burning/multifuel variants until your nose is literally touching the glass (not something we would recommend!). We have seen huge strides in technology, introducing an array of different lighting effects to capture that relaxing mood.

So under the Gazco brand name, there is no doubt that Stovax is now the name to remember for electric stoves – as well as their traditional wood-burning and multifuel stove offerings.

The first thing that hits you about the Vogue Midi T electric stove is the fact that as well as an enlarged front glass viewing area, there are two smaller side viewing areas. Yes, you literally have a panoramic 180° view which means that can you see the flickering flames from all areas of the room, which also adds to the ambience. What is coming through in the electric stove market is the fact that consumers see these as both heating devices as well as adding character to their room – an element of the design.

This machine has dimensions of height 776 mm, width 418 mm with a depth of 348 mm. Even though the heat output is a relatively modest 1.5 kW, this is enough to take the chill off a room and create that certain ambience. Thankfully, in this day of Ecodesign and environmentally friendly concerns, the Vogue Midi T electric stove is compliant with the new regulations. While there is an open window detection system, which immediately cuts the power, many people don’t realise but you can also use this with the lighting alone, heating off.

The Chromalight immersive LED system gives you three different flame options, and 14 different fuel bed light settings. Perfect! Last but not least, the thermostatic remote control allows you to lie back, kick off those shoes and control the machine from the comfort of your sofa.

The first thing that strikes you about the Vogue Midi T midline electric stove, aside from the log store, is the enlarged viewing area at the front and the two side panels. The fact that you can see the flickering flames and feel the heat from all sides of the room certainly adds to its appeal. The panoramic view of the fuel bed and the flames creates an ambience not dissimilar to a wood-burning stove. Again, in line with the other Vogue Midi T electric stoves, the heat output is a relatively modest 1.5 kW but again enough to take the chill off a small to medium-sized room. The dimensions are similar to the wood-burning stove at height 927 mm, width 418 mm with a depth of 348 mm. As we touched on above, people now view modern day electric stoves as much as a heat source as they do designer furniture for their room.

It is only when you dig a little deeper and realise that this machine incorporates the Stovax Chormalight immersive LED system that you begin to understand the degree of control. As well as three different flame options, amber, blue, amber with blue accent, there are 14 different fuel bed settings. When you begin to tinker with the settings you will realise the range of different colours and different ambience you can create. Oh, yes, there’s also the small matter of a thermostatic remote control which means you don’t actually have to move!

In this era of Ecodesign friendly heating products, not to mention focus on climate change, you will be pleased to know that the Vogue Midi T midline electric stove complies with the new regulations. There is also an open window detection system, which will immediately cut the power to save waste. It is difficult to do the Vogue Midi T midline electric stove justice in words alone; you really have to see it for yourself.

If we asked you what struck you first about the Vogue Midi T Highline electric stove what would you say? Would you focus on the eye-catching design, which incorporates not only an extended viewing area at the front but also two glass side panels? Perhaps the highline log store caught your eye? Or was it the flickering flames and the “burning embers” which look and feel as if this should be a wood-burning stove model? Where do we start?

The modern day electric stove is very different to those of years gone by, the highly uneconomical and potentially dangerous three-bar electric fires. The introduction of Ecodesign regulations, together with ever greater focus on climate change, has helped to mould a whole new variety of wood-burning, multifuel and electric stoves. Before we go any further, you will be relieved to know that the Vogue Midi T Highline electric stove is compliant with all of the new regulations. Indeed, it even has an open window detection system which will immediately cut the power, to save wastage.

In some ways the heat output, a modest 0.75 kW to 1.5 kW, is irrelevant for many people. While obviously a source of heat, able to take the chill off small to medium-sized room, it is as much an element of designer furniture as it is a heating source. As you can see from the image, the Vogue Midi T Highline electric stove is the tallest in the range with a height of 1260 mm, width 418 mm and a depth of 348 mm. It is important to note that the design and materials used for the Vogue Midi T Highline electric stove are exactly the same as those used with the wood-burning/multifuel variations. From a distance, it is safe to say that you would never guess this was an electric stove!

Now we will take a look at the all-important Chromalight immersive LED technology which perfectly complements the design and the three viewing windows. You can select one of three different coloured flames and up to 14 different fuel bed settings. It is only when you begin to tinker with these elements that you realise the changing look and ambience they create. Many people prefer to use the Vogue Midi T Highline electric stove without the heat, the lighting source offering a central focal point and creating a relaxing atmosphere. As with the majority of electric stoves on the market today, you really have to see them in real life to appreciate all they have to offer.

While the three glass viewing areas are an integral part of the Vogue Midi T electric stove range, it is safe to say that with the Vogue Midi T Wall mounted electric stove they are even more visible. They are literally on your level, staring at you. While the enlarged viewing area at the front catches your eye, for many it is the subtle side panels which add that finishing touch. The ability to watch the flickering flames and the burning embers from all sides of your room is a sight to behold.

Many people fail to notice the difference between the Vogue Midi electric stove and wood-burning/multifuel versions from a distance. Why? Simple, the materials and the design used in the Vogue Midi T Wall mounted electric stove are exactly the same as their wood-burning/multifuel counterparts. It is only when you get close up that you can spot the real difference, much of which is based around the Chromalight immersive LED system. Offering three different flame colours, 14 different fuel bed light settings and all controlled via a thermostatic remote, you are in full control.

Historically, many people have dismissed electric stoves as irrelevant and outdated. It is safe to say they have not come across the range of Vogue electric stoves. The eye-catching front and side viewing panels, the identical design to the wood-burning/multifuel versions together with the multiple flame colours and 14 different fuel bed settings, offer options aplenty. Slowly but surely consumers are getting switched on to electric stoves, the ambience they can create and the fact that they are already compliant with forthcoming Ecodesign regulations.

If you are considering an electric stove, we recommend viewing them in person, you will be amazed!