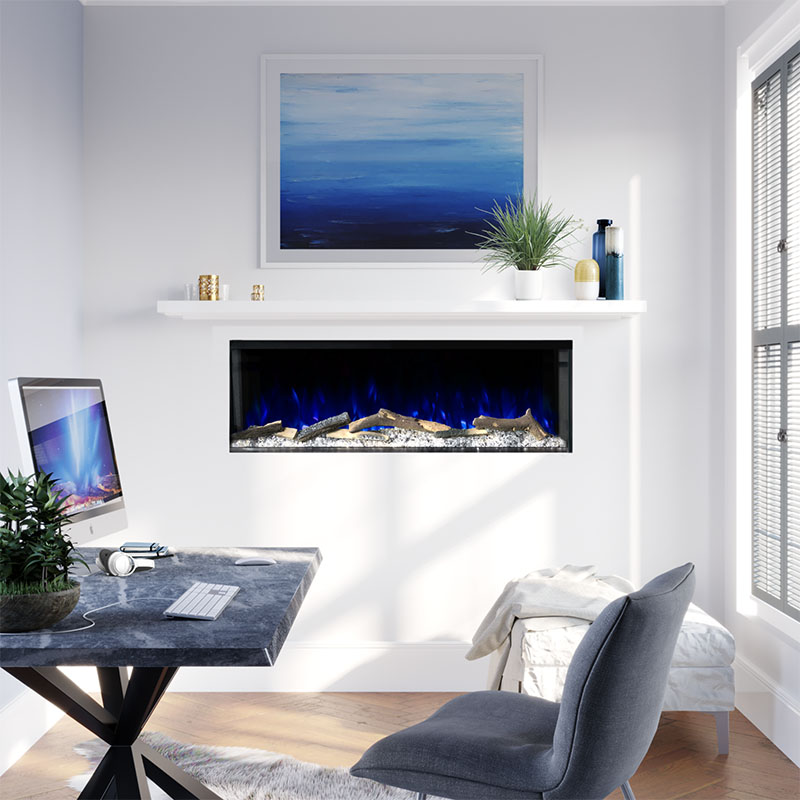 Those who follow the UK wood-burning, multifuel and electric stove market will be well aware of Arada stoves. This is a company which has been at the cutting-edge of the UK stove industry for many years. An uncanny ability to read the market, deliver affordable yet stylish stoves has ensured that they maintain their seat at the top table. However, it is all good and well having a track record second to none, but has Arada stoves managed to maintain this cutting edge?

The simple answer is yes. We will now take a look at the new Arada Ecoburn stoves, Arada Holborn stoves and the new Ellere electric stoves. What surprises does Arada have in store for us today?

In this first section we will take a look at the latest in multifuel, wood-burning and inset stoves from the Arada stable. Many people have highlighted the company’s ability to maintain the stylish traditional look while incorporating the latest in combustion technology. No mean feat!

The quality of Arada Ecoburn multifuel stoves will come as no surprise to those who follow the Arada range of stoves. As you can see from the image, this is a traditionally designed stove but one which also incorporates the latest combustion technology. There is certainly a skill in maintaining the traditional look while incorporating the latest technology. It is fair to say that Arada stoves have mastered this skill!

It will be no surprise to learn that the Arada Ecoburn 4 multifuel stove has heat output up to 4.5 kW. What will surprise some people is the fact that this machine is DEFRA approved for use in smoke control areas. Smoke control areas are growing in number, as the climate and emissions come under yet greater focus, so this is a godsend for many stove enthusiasts. This focus on emissions is highlighted by the efficiency rating which comes in at 86%. In layman’s terms this means that only 14% of fuel energy is lost between combustion and heat radiation. Impressive!

So, it is safe to say that the Arada Ecoburn 4 multifuel stove is going to be as popular as earlier models in the range.

The first thing that hits you about the stylish Arada Holborn 4 wood burning stove is the relatively large viewing area. For many stove enthusiasts, the viewing area is an integral part of the attraction of individual stoves. The opportunity to watch the flickering flames and the burning members, while you drift off to sleep, is a feeling that money just can’t buy. As with all of the new Arada stoves it is also worth remembering the new combustion technology under this classic design.

It certainly pays to do your research regarding stoves otherwise you would not know about the new Arada flexifuel system. This improves efficiency while reducing emissions. The new system works so well because of the unique bowl shape in the centre of the grate. This ensures that all fuel remains in the centre of the grate, maximising combustion while minimising waste. This particular machine has a maximum heat output of around 4.5 kW and an efficiency rating of 86%. How often do you see ratings in the high 80s?

The top or rear flow outlet gives you greater optional placement in your room, with many people seeing stoves as furniture as much as heating products. Yet another one from the Arada stoves stable set to become a winner.

In years gone by there seemed to be a misconception that inset stoves were difficult to install and challenging to maintain. This is an issue which companies such as Arada stoves have been looking to address for some time. Therefore, it was no surprise to see the launch of the Arada Holborn 5 inset multifuel stove nor the instant popularity of this cutting edge device. Those who have knowledge of stoves will be well aware that inset machines are perfect where you have limited space to play with. They are effectively built into your wall, almost flush against the surface, and not only extremely efficient but very easy on the eye. The Arada Holborn 5 inset multifuel stove has a maximum heat output of 4.8 kW and the fact it is a multifuel stove means you can burn wood and solid fuel.

Surprisingly, for an inset machine, the Arada Holborn 5 inset multifuel stove is DEFRA approved for use in smoke control areas. This is a very important issue going forward as governments and regulators clampdown on emissions as they look to tackle climate change. This machine certainly stands up to any others in the market, with an 80% efficiency rating. The fact that the fuel is burnt and re-burnt means greater heat output, less emissions and fuel cost savings. This type of technology has taken years to design and perfect. It is fair to say that Arada are now reaping the rewards of their long-term investment!

As you may guess from the title, the Arada Holborn 7 inset multifuel stove offers heat output of 7 kW (actually touching 7.1 kW) and is therefore perfect for larger rooms. There are numerous factors to take into consideration including the enhanced viewing area, the inset design which is near enough flush with your wall and the efficiency rating of 72%. The use of primary and secondary air supplies not only ensures that the viewing area remains clear at all times but also complements the combustion process. The ability to burn and re-burn fuel ensures maximum fuel usage and minimal emissions.

As a consumer it can be difficult to comprehend the challenges faced by stove companies such as Arada. They not only need to maintain the designs and styles which consumers demand but also incorporate the latest in combustion technology. Regulations have tightened, and will continue to tighten going forward, causing significant headaches for stove manufacturers. Thankfully, companies such as Arada stoves are ahead of the game, looking to the future and incorporating the latest in combustion technology today.

We know that the Arada Holborn 7 inset multifuel stove is already proving popular, just one of many new stoves brought to the market by the Arada. We can’t wait for the next offering!

While multifuel and woodburning stoves will always be popular in the UK, there is certainly growing demand for electric stoves. Companies such as Arada recognised this some time ago and have been investing heavily in electric fires. It has been challenging to correct the image of electric fires, the two or three bar electric fires of years gone by, but thankfully progress is being made. So, what can we expect from the new additions to the Arada electric stove stable?

Commonly referred to as the Arada Ellere Electric Fire EL100R this is the latest electric stove offering from Arada. When you consider that the heat output is a modest 1.4 kW to 1.6 kW, this is not necessarily a machine built for heat alone. The Arada Ellere Electric Fire EL100R is perfect for taking the chill off a small to medium sized room but for many it is the ambience and the atmosphere it creates that makes it stand out.

You have full control over the LED powered flame and fuel bed effect, a remote control which can be used away from direct sight of the machine and the ability to program seven days in advance. This is the smaller of the Arada Ellere Electric Fire range but as you can see, it is extremely easy on the eye. Surprisingly, many people struggle to recognise the fuel bed is actually made from vermiculite and ceramic logs until they are up close and personal.

It is fair to say that many people see a modern day electric stove/electric fire as much a piece of furniture as a heating device. However, have you ever seen a more striking electric stove than the Arada Ellere Electric Fire EL100R?

The comparison between old style electric fires and the modern day electric stove is like comparing apples and pears, irrelevant. The Arada Ellere Electric Fire EL130R is the second in the Arada Ellere Electric Fire range with a length of 1300 mm. These machines come with an optional two or three sided installation, offering the front glass section and two corners where applicable. How cool will that look!

There are a staggering 144 variations on the LED flame allowing you to create different colours, atmosphere and ambience. The remote control allows you to program the Arada Ellere Electric Fire EL130R 7 days in advance. Thankfully, there is also an overheat safety cutout which is unlikely to be activated but useful to have. The mix of clear crystal LEDs and vermiculite/ceramic logs look so real that it is only when you get up close that you realise they are not logs.

Electric stoves are not for everybody but there is no doubt they are as much an element of furniture as they are a heating device. It is important to note that heat output is modest at between 1.4 kW and 1.6 kW but nonetheless enough to take the chill off your room. We recommend that you try to view an Arada Ellere Electric Fire EL130R in person, you won’t be disappointed!

The heat output of the Arada Ellere Electric Fire EL150R is a modest 1.4 kW up to 1.6 kW but this is still more than enough to take the chill off a small to medium sized room. The remote gives you full control over the device and the ability to set times, LED and fuel bed displays an impressive seven days in advance. Yes, you can have your Arada Ellere Electric Fire EL150R ready for when you return from the office, shopping or a day out. How impressive is that?

We know that companies such as Arada have been working on their electric stove machines for some time. They have invested significant money into this project and the results, extremely impressive, are there for all to see. Like so many new electric stoves, the Arada Ellere Electric Fire EL150R should be viewed in person for the full effect.

While the heat output is modest at 1.4 kW to 1.6 kW, you will still feel the heat when the machine is on full. However, for many people an electric stove is as much an element of furniture as it is a heating device. The design and look of the Arada Ellere Electric Fire EL180R is breath-taking, stylish and eye-catching. The LED lighting complements the log effect fuel bed with an impressive 144 different possible settings. The remote gives you full control over the Arada Ellere Electric Fire EL180R from switch on and switch off times, to the LED settings and the heat output.

Like many modern day electric stoves, the Arada Ellere Electric Fire EL180R has an automatic overheat cut-off for enhanced safety. This is a very impressive machine, the beauty of which you will only realise when you view it in person. Highly recommended!

Arada stoves are one of the leading lights in the UK wood burning, multifuel and inset stove markets. This is a company which continues to deliver awesome designs, breath-taking technology and more recently eye-catching electric stoves. Quite how the company has managed to maintain this reputation, in what is a very competitive marketplace, is difficult to understand. It may be their attention to detail, long-term planning or the investment of significant funding into new projects. Either way, the company continues to astound and surprise in equal measures, long may this continue.